Jonathan Newell travelled to Segensworth to visit Porvair to find out about the special requirements needed for filtration products in the gasification industry.

One of a cluster of high-tech companies occupying the modern Segensworth industrial estate in Hampshire, Porvair's manufacturing unit has a global reputation for shipping high quality filtration products to a wide range of industries ranging from miniature filters for healthcare and aerospace to the gigantic units required for energy production in gasification plants.

It was during a visit to Segensworth that I met Porvair's Andy Bevis, a specialist in gasification filters, to discuss the product in some depth after seeing them being produced in the manufacturing unit.

With natural gas predominating for domestic use for over 40 years, many don't remember the “coal gas” that it replaced. This was manufactured by chemically breaking down the coal to produce a fuel gas and other products.

This process is gasification and it can be applied to any carbonaceous product, the most common of which are coal, which is still used extensively for producing gas for energy production or industrial use, Municipal Solid Waste (MSW) and petcoke, a by-product of oil refining processes.

Gasification has a number of advantages including the output of more manageable fuel with better combustion properties than the feedstock from which it came. An example is one of Porvair's customers, a steel works in Korea, which gains more cost efficiency from using coal gas from its own gasification plant than the use of purchased liquefied natural gas.

Another major customer of Porvair is in India, where the largest gasification installation is located. It produces millions of tonnes of Petcoke annually, which is converted into syngas for conversion to chemical products.

Although much smaller in scale, MSW gasification is more commonly encountered and one which Bevis believes will grow due to the clear benefits of gasifying waste. “Household waste gasification makes sense because otherwise you're burying vast amounts of energy while digging up other hydrocarbons out of the ground,” he told me.

Using this model, household and business waste becomes a commodity rather than a cost burden and therefore attains a value. According to Bevis, they can each produce around 50-60MW of energy, sufficient for around 60,000 households.

The condition to which the filters are exposed to in any gasification process is extremely harsh as they have to remove the “char”, solid products including carbon and metal oxides from the process. This char is produced at alarmingly high rates under pressures of up to 50bar and very high temperatures.

However, there are some differences which have to be taken into account when designing the filter. Coal gasification produces more char that has a fine grain size at a rate of around 3% by weight so there is less of it but it is more difficult to filter.

On the other hand, Petcoke produces a coarser char which is easier to filter but there's more of it at around 6% by weight.

MSW gasification is entirely different in its filtration needs as the process takes place at much lower pressures which are near atmospheric or even at a vacuum. Also, the particles are very fine and the composition of the char is different to that which is produced from coal or Petcoke.

MSW produces tar in addition to solid waste, which is problematic in terms of filtration since the tar may condense in the filter media causing rapid blockage of the filter elements. To prevent the tar from blocking the filters, MSW gasification takes place at temperatures of between 650C and 900C.

The filter medium and the alloys used in the container are therefore different depending on what feed stock is being used in the gasification process.

The high pressures and temperatures expose the filtration system to significant mechanical and thermal stresses but the chemical environment also poses difficult challenges for filter designers, as explained by Bevis.

“The gas carries corrosive components like Hydrogen Sulphide, Hydrogen Cyanide and water so there's a high potential for sulfidation which is a form of very rapid corrosion. When sulphides form, they block the filter medium whilst simultaneously reducing the tensile strength of the metal through loss of mass,” he said.

Such hostile conditions therefore attack both the filter medium and the structure that contains them. Normally, corrosion resistant materials will still be corroded at a rate of a few microns every year but for filter materials where the fibres are just 10-30 microns in diameter, this is an intrusive rate that equates to around 20% material loss per year when you consider that corrosive processes operate around the whole circumference of the fibre. Material choice and material protection are therefore important considerations in filter design.

Unlike the small disposable elements that are normally associated with filtration, those used in large gasification plants are themselves complex items of process engineering, incorporating a vessel with gas distribution systems and a matrix of filter elements. For coal or petcoke plants, there can be as many as 750 filter elements with a length of up to 2.5m in one vessel.

Each filter element is cylindrical in form by a wall of filter media which is capped at each end and then grouped together in triangular sets and then in larger clusters with controlled spaces between each filter element.

The syngas to be filtered passes radially into the structure, through the filter media and the clean gas exits axially from the tubes leaving the char deposited on the outer surface of the filter tubes, a layer of “cake” that needs to be periodically removed in order to prevent it from restricting the flow through the filters.

With up to 6% of the mass flow challenging the filter being char, there needs to be a means of self-cleaning and this is done by blasting the char off the outside of the filter tubes. This is achieved by periodically blowing back a blast of gas into the tubes which blows the cake off into the controlled voids between the filter tubes. As the bulk density of the char cake increases due to agglomeration, they achieve sufficient mass momentum to settle to the bottom of the vessel due to gravity so that when the flow is returned to the normal gas operating direction, the char doesn't get re-entrained onto the filter media.

In an ideal world, this would provide an indefinite life to the filter but the reality is that blowing back doesn't completely cleanse the filter and there is still some contamination and degradation. According to the “Filter cake theory”, which is applicable to all filters, the cake in fact provides some protection to the filter medium and acts as a filter itself. Therefore, when the back-pressure pulsing takes place, the removed cake no longer provides any filtration and exposes the filter medium to the fresh challenge of operating unaided.

After each pulse, there is a degree of pressure drop recovery across the filter, however after a large number of pulses, the pressure drop has reached the extent that the filters need to be removed and cleaned offline. According to Bevis, a balance has to be established between the pulsing frequency and the expected life of the filter. “With each filter set we produce, we generate a series of condition models to determine the probability of achieving the required performance between maintenance schedules based on variable operating parameters,” he told us.

Based on these models, a planned cleaning and maintenance schedule is produced and matched against real pressure drop measurements after pulsing to determine whether the plant is operating at the predicted balance.

With its experience in gasification plant filtration, Porvair's Segensworth factory is poised to take on the growing market for generating energy through gas conversion processes. 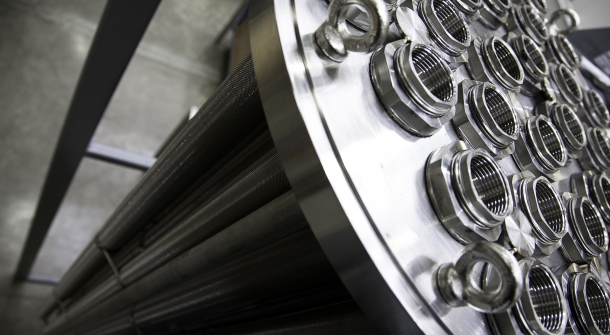 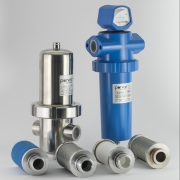 Compfil™ range of products for the filtration of compressed air 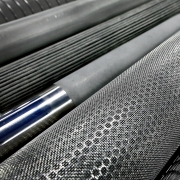